From VR’s CEO, Dr. Michael Gunning, “Last November, VR announced the discovery of a new niobium-Rare Earth metals mineral system on its wholly-owned Hecla-Kilmer property with the intersection in Hole 13 of 238 meters @ 0.2% Nb205 with 0.5% TREOincluding sample intervals of 1.7% TREO with 18% PMREO over 3 meters. With that intersection, the Company completed a thorough review of its regional database and staked the Northway property located approximately 15 km to the northeast.

Hon Figure 1the location of Northway is shown within the regional-scale Kapuskasing Structural Zone (KSZ) and rift through the Superior craton, together with the locations of VR’s HK and Ranoke properties.

Hon Figure 2, the location of Northway is shown in relation to the northern boundary of the mafic volcanic Wabigoon province of the Superior craton, similar to the location of Hecla-Kilmer on the opposing southern boundary. Both boundaries are tectonic suture zones of regional scale. Note also the reverse magnetic polarity of the regional magnetic anomaly at Northway, forming a prominent magnetic low, akin to the reverse polarity in the northwestern part of the HK complex where critical metal discoveries have been made in drill holes 5 and Hole 13.

Figure 3 shows the new drone magnetic data at Northway. The anomaly is high amplitude, sharply defined and approximately 1,300 meters across. Critical metal mineralization intersected to date at Hecla-Kilmer is controlled by structures that disrupt patterns in magnetic and gravity maps. Similarlynote the clear disruption of the concentric magnetic anomaly at Northway by a structure that is parallel to the regional-scale, southwest-trending KSZ.

It is also important to note in Figure 3 the location of gold and copper grains in creeks draining from the Northway property into the Mattagami River (OGS regional survey, 2001, 3,106 samples).

Our hydrothermal breccia exploration strategy on the KSZ started in 2018 at Ranoke, where fluorite and hematite veins confirmed the prospectivity of the model, and seeded the 238 and 243 meter critical metal intersections respectively at Hecla-Kilmer two years later. With the new magnetic data from Northway, we have initiated the permit application process for drilling to further expand the strategy.

The discovery at Hecla-Kilmer contributes to the rapidly evolving critical metal strategies of governments across North America aimed at growing domestic EV and wind turbine sectors in order to sustain the growth of the green economy. This relevance underscores the potential value of HK to our shareholders, and we look forward to providing further updates as we receive final drill data from Hecla-Kilmer, and add Northway to an expanded and integrated exploration strategy going forward.”

Summary technical and geological information for the Company’s various exploration properties is available at the Company’s website at www.vrr.ca.

VR submitted all drill core samples for geochemical assay to the ALS Global Ltd. (“ALS”) laboratory facilities in Timmins, Ontario, with final geochemical analytical work done at the ALS laboratory located in North Vancouver, BC., including lithium borate fusion, ICP-MS and ICP-AES analyzes for base metals, trace elements and full-suite REE analysis, and gold determination by atomic absorption on fire assay. Analytical results are subject to industry-standard and NI 43-101 compliant QAQC sample procedures externally by the Company and internally at the laboratory as described by ALS.

Technical information for this news release has been prepared in accordance with the Canadian regulatory requirements set out in National Instrument 43-101. Justin Daley, P.Geo., Exploration Manager and Chief Geologist at VR and a non-independent Qualified Person oversees and/or participates in all aspects of the Company’s mineral exploration projects, and the content of this news release has been reviewed on behalf of the Company by the CEO, Dr. Michael Gunning, P.Geo., a non-independent Qualified Person.

The Hecla-Kilmer complex is located 23 km northwest of the Ontario hydro-electric facility at Otter Rapids, the Ontario Northland Railway, and the northern terminus of Highway 634 which links the region to the towns of Cochrane and Kapuskasing to the south, located on the northern Trans-Canada Highway.

The Northway property consists of 47 mineral claims in one contiguous block approximately 3 x 3 km in size and covering 966 hectares. The property is owned 100% by VR. There are no underlying annual lease payments on the property, nor are there any joint ventures or back-in interests. There is no royalty attached to Northway because it was staked by VR directly.

Northway is located on provincial crown land in northern Ontario, with mineral rights administered by the Ontario Ministry of Northern Development, Mines, Natural Resources and Forestry (“MNDM”). There are no annual payments, but the MNDM requires certain annual exploration expenditures and reporting. The property falls within the traditional territories of the Moose Cree and Taykwa Tagamou First Nations.

VR is an established junior exploration company focused on large footprint, greenfields opportunities in copper, gold and critical metals in the western United States and Canada (TSX.V: VRR; Frankfurt: 5VR; OTCQB: VRRCF). VR is the continuation of 4 years of active exploration in Nevada by a Vancouver-based private company. The diverse experience and proven track record of its Board in early-stage exploration, discovery and M&A is the foundation of VR. VR owns its properties outright and evaluates new opportunities on an ongoing basis, whether by staking or acquisition.

The Company continues its normal course of business in 2022 within the framework of modified exploration programs in response to the COVID-19 pandemic, with the goal of ensuring the health and safety of staff and project personnel.

ON BEHALF OF THE BOARD OF DIRECTORS:

For general information please use the following:

This press release contains forward-looking statements. Forward-looking statements are typically identified by words such as: believe, expect, anticipate, intend, estimate, postulate and similar expressions or those which, by their nature, refer to future events. Forward looking statements in this release include those related to the companies upcoming plans, such as “The discovery at Hecla-Kilmer contributes to the rapidly evolving critical metal strategies of governments across North America”, and “VR evaluates new opportunities on an ongoing basis, whether by staking or acquisition.” 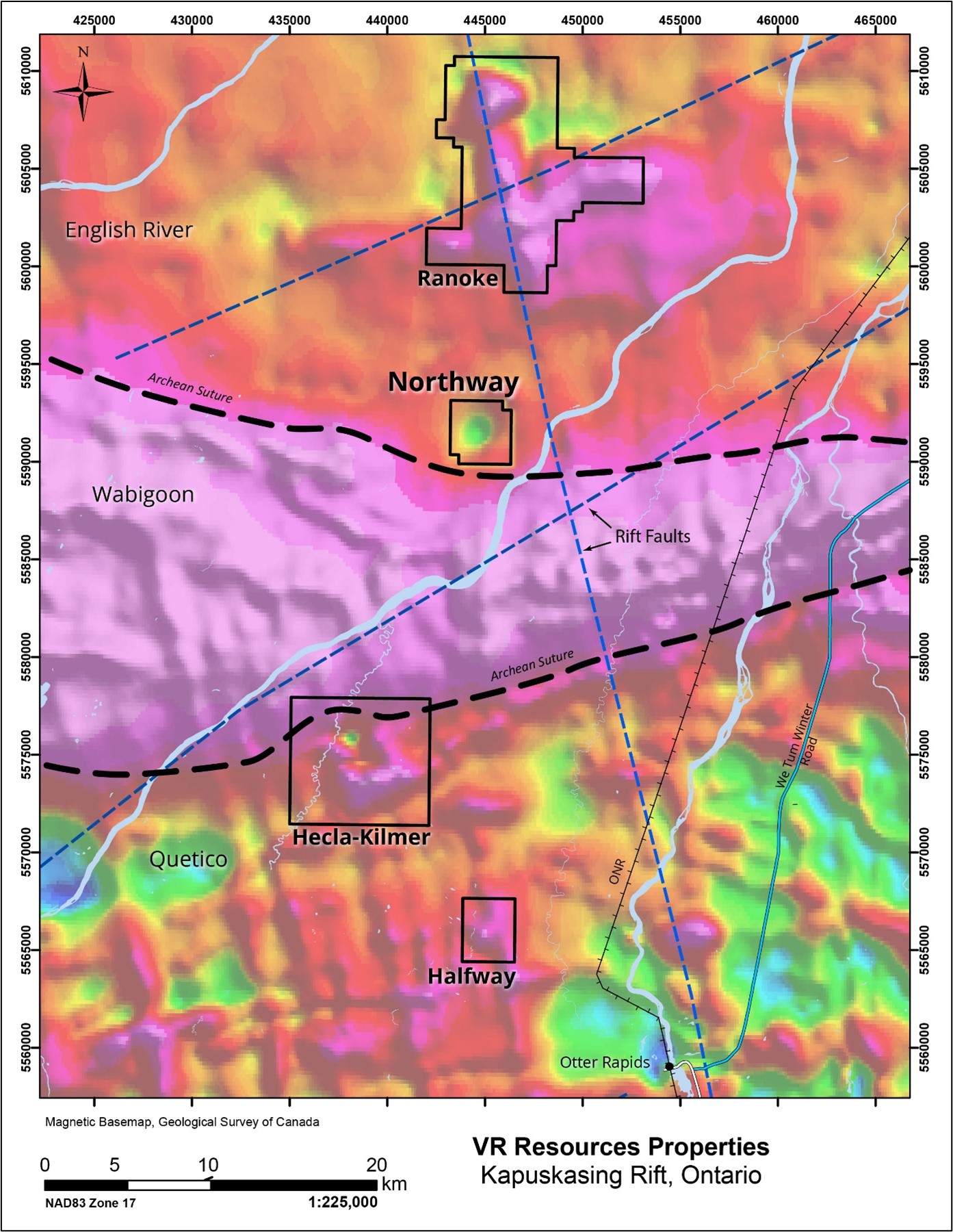 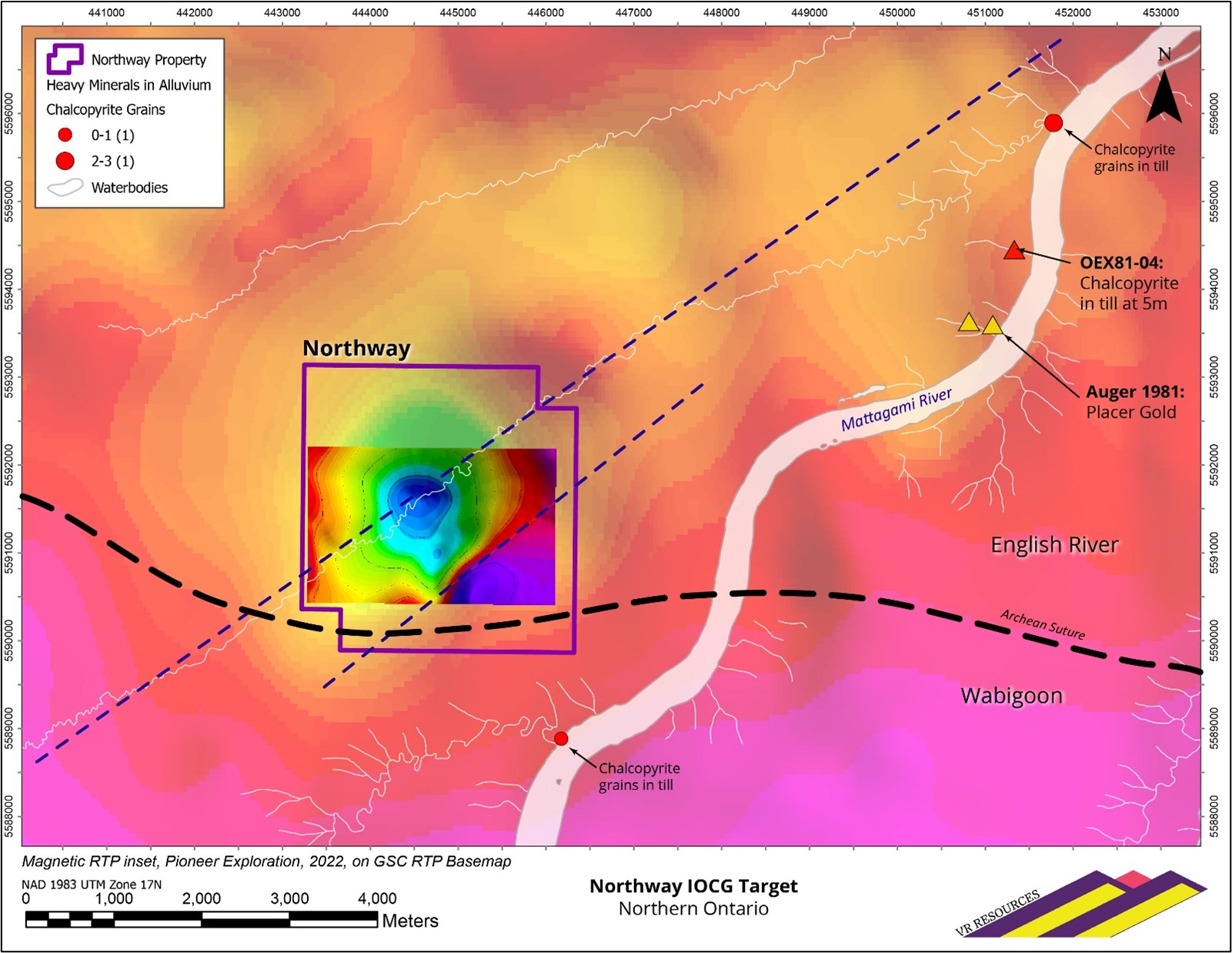