Standing on the side of Highway 116, which winds through the dense forests of western Sonoma County, John Dunlap looked across the Russian River into a stand of tall trees and pointed out one old redwood in particular.

“It’s really a hidden gem here that’s kind of out of sight, out of mind,” he said. “But that doesn’t mean it isn’t deserving of our attention.”

Up from the riverbank near Guerneville is the county’s tallest tree, an estimated 2,000-year-old, 340-footer known as the Clar Tree. Once thought to be the tallest tree in California, it carries the name of a timber family that lived in the area back when it was a logging capital. It is easily identifiable by its dead, forked crown — the result of a lightning strike some years ago.

Passersby wouldn’t be able to glean the tree’s significance at a glance — its prominence is somewhat camouflaged by its brethren — yet the Clar is at the center of an impassioned dispute over how best to care for California’s iconic, old-growth coast redwoods, the towering titans that have inspired generations of naturalists but were nearly cut to extinction during California’s frenzied development 150 years ago.

The tree stands at the edge of a 224-acre property of redwoods, firs and oaks that has been logged in pieces for decades and is considered a “high fire hazard severity zone.” The Cloverdale timber company that owns the land, Redwood Empire Sawmill, is intent on harvesting redwood there “sustainably” and as soon as possible. 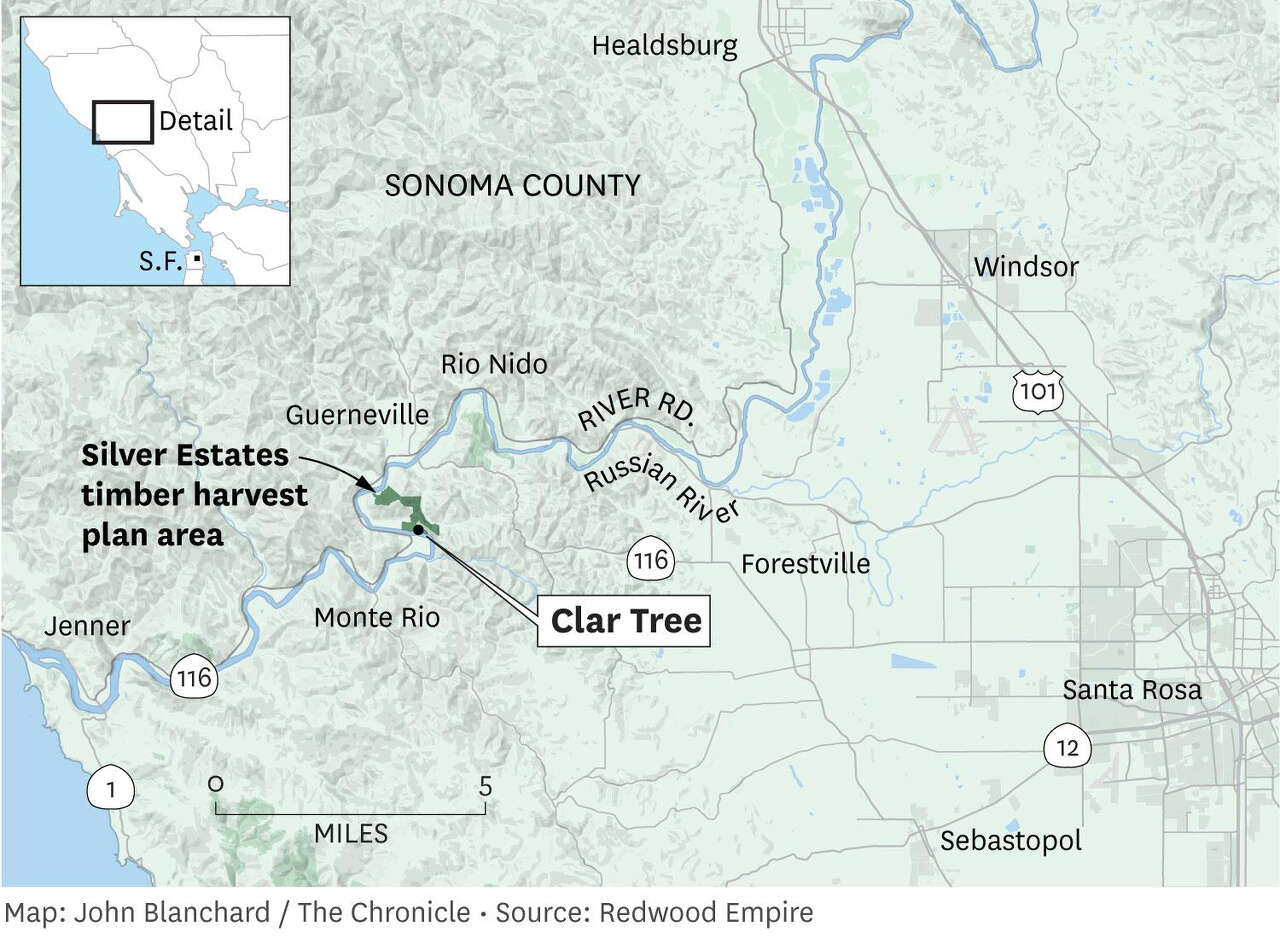 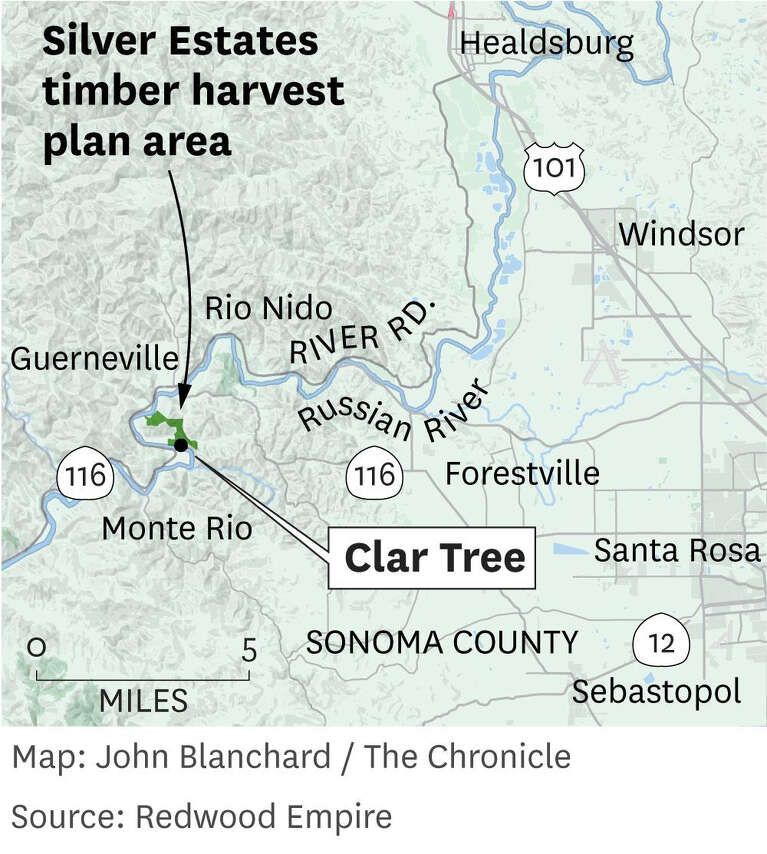 The company submitted its timber harvest plan two years ago to an environmental review team led by Cal Fire. Now, after a delay related to the public notification process, the agency is poring over several hundred public comments and is expected to issue its decision any day. It could approve the plan outright, which would allow the loggers to get to work, or it could return the plan with suggested changes.

The deluge of community responses is due in part to a grassroots effort led by Dunlap, who recently formed the Guerneville Forest Coalition, and other conservationists to persuade forest authorities to rethink logging practices around virgin redwoods.

The question is not whether the Clar Tree should be spared the saw. Everyone, including the timber company, acknowledges its historical significance and agrees it should be preserved — a change from the 1980s when a different timber company tried to harvest it but was stopped after legal action.

“It’s a legacy tree for the county. It’s unique. We don’t have any intention of affecting it,” said Nick Kent, resource manager for Redwood Empire, which owns 200,000 acres in California. “We feel we’re protecting the Clar Tree by just not operating around it.”

Redwood Empire’s plan includes a 75-foot “no harvest” radius around the tree. But opponents say that’s not nearly enough space. They want a radius equal to the Clar’s height, which would amount to a no-cut area greater than 8 acres.

“For something as tall and majestic as that tree, 75 feet is just not adequate,” Dunlap said. “Since we don’t have many old-growth trees left, we need to be more vigilant in protecting them.”

Redwood Empire aims to selectively cut about one-third of the trees — mostly redwoods — on the property. The company says it will help the long-term health of bigger, older trees there.

But several locals worry that removing too many redwoods would compromise the visual aesthetic of the scenic highway corridor. Others harbor concerns about the possibility of erosion and landslides on the sloping terrain.

Redwoods often intertwine their roots for collective stability, and one argument holds that removing the Clar’s neighbors would increase its exposure to winds barreling down the river canyon that could uproot the tree.

Some residents argue the redwoods should be left alone entirely as habitat for flora and fauna that may include the northern spotted owl and the marbled murrelet, both threatened species.

“Redwoods are a national treasure that takes generations to cultivate,” resident Casey Costello wrote in an email to Cal Fire last year.

A key point of contention is what effect logging might have on the possibility of forest fire.

Tens of thousands of acres have burned in Sonoma County in the past five years, and there’s palpable angst in the public comments about heightened risk of wildfire if more flammable trees like tanoaks or bay trees grow back instead of cut redwoods.

Redwood Empire and Cal Fire, however, contend that the style of selective cutting outlined in the harvest plan will reduce the fire danger. In an email to The Chronicle, a Cal Fire staff chief wrote that the “vegetative fuels reduction and slash treatment” will result in a “slight reduction in fire risk.”

“We feel like we really went above and beyond” in designing the plan, said Kent, of Redwood Empire. “The end result is, we’re going to stabilize the roads and reduce the fire hazard out there.”

Dunlap and other environmentalists say they aren’t opposed to logging on principle but that there is more at stake near a 2,000-year-old redwood.

To bolster his argument, Dunlap contacted Todd Dawson, a UC Berkeley professor who has studied coast redwoods and giant sequoia forests for 30 years. Dawson believes science is only beginning to plumb the depths of the trees’ importance. For example, redwood forests’ critical ability to store more carbon dioxide per acre than any other forest on Earth was discovered only recently.

Dawson cited a nascent body of research showing that the roots of established trees swap nutrients and water with expansive subterranean fungi networks — linkages called “mycorrhizal connections.” The benefits of these symbiotic relationships are not fully understood, Dawson said, but researchers believe that below-ground disturbances can have consequences for the surrounding forest.

Scientists haven’t yet tested the activity of redwood root systems in this regard, Dawson said, “because it’s so bloody hard to study.”

But Dawson says some scientists believe redwoods are more sensitive than we know.

He remembers conferring with other redwood researchers at a conference in 2004 about a troubling trend they’d noticed at Avenue of the Giants Parkway, the scenic roadway that snakes through a spectacular expanse of old growth redwoods in Humboldt County. Shortly after the pavement had been laid along a segment of dirt roadway there, several of the trees’ crowns began thinning out — a puzzling change.

“People who knew the trees before and after wondered whether putting in the roads was responsible for the change we saw,” he said.

Redwood Empire’s harvest plan makes no mention of possible impacts to the root-fungi connections, which Dawson says almost certainly extend beyond 75 feet from the base of the tree and could be hurt by heavy equipment churning through the soil.

“That’s not something we normally cover” in the harvest plan, Kent said. “That’s pretty speculative.”

Dawson’s ideas are referenced in some of the comments submitted to Cal Fire, including one authored by Sonoma County Natural Resource Manager John Mack. Mack submitted a note to Cal Fire requesting that the protective buffer around the Clar Tree be extended to at least the tree’s height, or that the agency or timber company provide “a scientific justification of the efficacy” of an approved buffer.

“In my view, there should be a formal investigation to find out to what extent the tree would suffer negative effects if there was high activity outside that 75-foot buffer area,” Dawson said. “Until we know that, we should literally be treading lightly.”

As the debate surrounding the harvest area enters its third year, Redwood Empire has opened the possibility of cutting its losses by abandoning its plan and selling the land. However, the property isn’t listed for sale and the company won’t specify a purchase price for the 224 acres.

“We’d accept reasonable offers from anybody,” Kent said. “We don’t have it listed but if someone wants to buy it, we’d listen.”

To that end, the company invited Sonoma Land Trust and representatives from two Sonoma County supervisors out to survey the land. But no deal has been reached.

“We assessed the feasibility for our successful involvement and decided since the Clar Tree is required to be preserved under the (timber harvest plan), we have other more urgent conservation priorities to pursue,” Sonoma Land Trust Executive Director Eamon O’Byrne wrote in an email to The Chronicle.

The Bodega Land Trust has expressed interest in buying a piece of land surrounding the Clar Tree and also tried to persuade Redwood Empire to agree to a conservation easement over that part of the property, but the company isn’t interested in either option.

“Easements are a good tool, but they affect the property value,” Kent said.

Cal Fire is expected to respond to the plan soon. If the harvest plan is approved, Dunlap says he would consider mounting a legal challenge.

Dunlap believes the tree isn’t properly appreciated in part because it’s inaccessible to the public. He’d like to see the area turned into a nature preserve, perhaps with a hiking trail up to the Clar Tree.

“We’d love to see a situation where people could raft or kayak along the river, dock along the bank and walk up and see the tree,” he said. “Clearly, the public hasn’t been made aware of what we have here.”