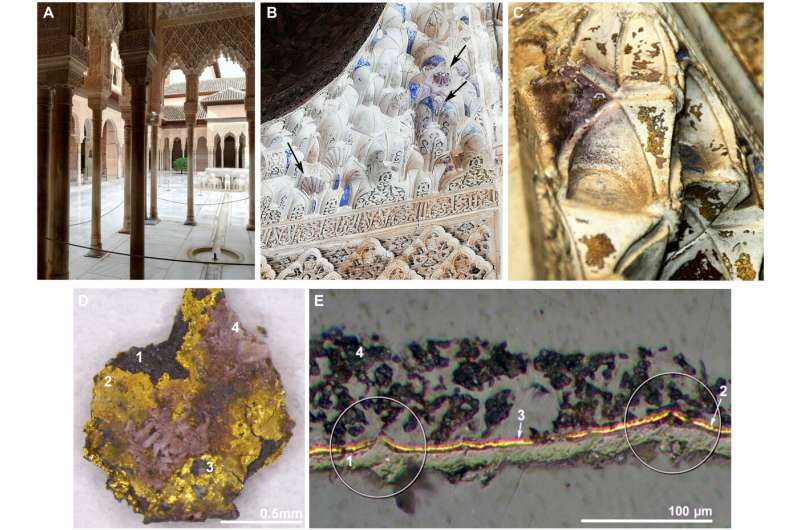 A pair of researchers at the University of Granada has solved the mystery of the purple stains on the ceilings of the famous Alhambra palace in Spain. In their paper published in the journal Science AdvancesCarolina Cardell and Isabel Guerra describe their study of the ceiling of the famous medieval fortress and what they learned about its mysterious purple stains.

Construction of the Alhambra began in 1238 and improvements were made over hundreds of years. At one point, artists added materials to parts of the ceiling that were supposed to resemble stalactites. Each was covered with tin and then gilded with a mix of gold and silver. The original color was light gold. But over time, many of the features began to take on a purple or blue color, giving the ceiling a distinctive look. Worried that the ceiling was degrading, workers in the 19th century applied gypsum over the gilding, making the ceiling white. Even the gypsum wore away, the purple color became visible once again. Early researchers suspected age and air pollution were responsible for the purple color but could not explain it. They knew that gold does not corrode, so it had to be due to an unknown factor.

In this new effort, the researchers took advantage of the capabilities of an electron microscope recently obtained by the University of Granada to take a closer look at the ceiling. They found that nanospheres made of pure gold had formed in the material over time—at such a small size, gold appears as a purple metal. Further study showed that over time, flaws in the original gilding admitted moisture, which carried salt from sea spray; that allowed contact between the metals in the gilding, and the tin corroded and pushed its way to the surface. Additional chemical reactions led to the formation of the gold spheres, which eventually settled into the gypsum.

The researchers suggest that in addition to solving the mystery of the purple stains, their work might also be of use to other historians working on damaged artwork or architectural sites.